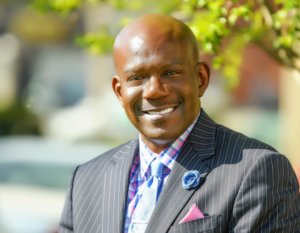 Since joining Capital Area Health Network (CAHN) in January 2018 as its Chief Operating Officer, Aaron has initiated a number of positive changes that serve to better the Network’s operations; which ultimately will benefit the community. Seeing firsthand the resources that often elude underserved and underprivileged communities, this Detroit/Ann Arbor, Michigan native is motivated by CAHN’s mission to eliminate health disparities and improve the quality of life for all individuals.  Through his innovative and forward-thinking style, he leads the continuous improvement of the Network’s operations – thus enhancing its reputation, credibility, and ability to carrying out their vital mission.

An accomplished leader, Aaron brings decades of experience and thought leadership to CAHN from his various positions of increasing responsibility  held with Pfizer, Inc., St. Jude Medical, and Zoetis, LLC.  This previous experience will help guide the Network’s direction and assist him in the management of its 6 facilities, one mobile unit and over 130 employees.

Aaron is an award-winning professional who has mastered the balance of holding his team accountable while still building strong relationships and a respectable rapport.  He recognizes his responsibility as a role model/leader, and strives to engage and encourage those around him to excel personally and professionally.  Many have recognized his talents, including Pfizer who twice awarded him its highest sales award, a place in its Vice President’s Cabinet.

His personal life serves as a strong, positive model for all. As a member of Kappa Alpha Psi Fraternity, Inc., and the Prince Hall Masons, he is constantly called upon to assist, sponsor, or engage in philanthropic programs designed to uplift the community.  Above all, Aaron enjoys no better role than being a dedicated father. His 15 year old son is a high school freshman and his 20 year old daughter is a college senior.