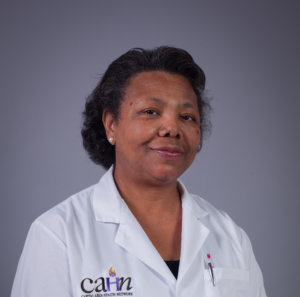 [/vc_column_text][vc_column_text]Dr. Malinda Brooks-Williams has been a physician for about 37 years. She has been in the medical profession for about 44 years. She is originally from Richmond. She attended Armstrong High School and then graduated from John F. Kennedy High School in Richmond. She obtained her undergraduate degree from the University of Virginia in 1974. She also received a degree in Cytotechnology (the study of Cells) from the MCV/VCU school of Cytotechnology in 1976. She worked as a certified cytotechnologist at the Boston Hospital for Women, Harvard University Hospital and then went to medical school where she obtained a M.D. degree in 1981 from the Medical College of Virginia.  She has been employed as a physician since that time. In 1986 she completed a residency program in Ob/Gyn at the Howard University Hospital. She then practiced for about 18 years in private practice as an Ob/Gyn physician. She also worked for the Richmond City Health Department for several years as a physician. Dr. Brooks-Williams received a degree in Family Practice from the VCU School of Family Practice and became board certified at that time in Family Practice. She worked for several years as an MCV Physician at one of the VCU clinics until she joined CAHN in 2013. Dr. Brooks-Williams enjoys providing health care to patients, going to church, traveling and spending time with family.[/vc_column_text][/vc_column][/vc_row]